Saskatchewan Highways are prioritized for snow removal and ice treatment based on highway classification and traffic volumes, click the links for more info.

Snow Piles in the RM 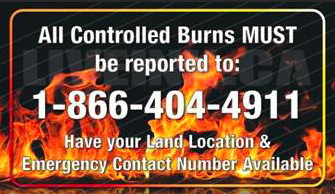 A controlled burn MUST be reported to the Controlled Burn Line at 1-866-404-4911 before the burn is started AND when the burn has been completed.

For more information on controlled burns and liability please read The Wildfire Act, with special attention to Sections 13, 33, and 54, and visit: www.saskatchewan.ca/residents/environment-public-health-and-safety/fire-safety/controlled-burns-and-grass-fires.

The Council of the R.M. of McCraney #282 has received several complaints regarding the Loraas Garbage Bins located behind the R.M. shop.

There have been many instances of ratepayers from other municipalities using the McCraney garbage bins, as well as individuals continuing to overload the bins, dropping their garbage outside of the overfull bins, and not closing the lids. All of this has been attracting stray cats and birds that are constantly dragging garbage out of the bins which has caused an unsightly and environmental problem behind the R.M. Shop.

For the above reasons, we are notifying you that both the Loraas garbage bins and recycling bin will now have locks on them effective immediately.

ONLY household waste is permitted in the garbage bins. Absolutely NO propane tanks, tires, paint cans, oil jugs, large batteries, or building materials are allowed in the bins.

These bins are for ALL ratepayers of the R.M. of McCraney only. Please be considerate with the quantity of garbage you are bringing.

If the bin cannot be closed and locked – do NOT add your garbage and overfill the bin or leave your garbage beside the bin.

The Council would like to reiterate that this is a strict warning. If the garbage bins continue to be misused in any way, the next step will be to discontinue use and the removal of the garbage bins altogether.

Littering is illegal across Saskatchewan, as per The Litter Control Act. If anyone is seen dumping garbage or waste on municipal roads, in ditches, on private lands within the R.M. or anywhere around the R.M./Village Shop, you will be reported to the Saskatchewan Conservation Officers and could receive fines up to $500 for your first offense and increasing amounts upon subsequent offenses. 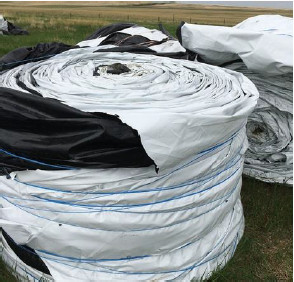 Council strongly encourages that all used grain bags or remnants thereof be rolled up and dropped off at one of the many collection sites.

According to the Ministry of the Environment, it is illegal to burn grain bags on public OR private property. Fines for burning grain bags range from $0 – 1 million dollars based on the severity of the offense.

The most relevant restrictions related to grain bag burning can be found in The Environmental Management and Protection Act, 2002, under Section 4(1) and in The Clean Air Regulations under Section 11.