In the spirit of community development and good humour; what better way to celebrate winter than with the unveiling of a giant snowman? An 18.5' snowman took up permanent residence on the end of Third Street in what was to become the Blizzard Capital of Saskatchewan. A special unveiling ceremony was held on November 22, 1983. Provincial Government dignitaries', Mayor Paul Rupcich and Chamber president Gus Millsap unveiled the gigantic snowman. Scrooge, Old Man Winter, and the Abominable Snowman attended the event.

Two snowmen in the persons of Patti Hertz and Rosemary O'Handley performed a Kenaston Theme Song. The Snowman had an unfortunate incident with his shovel; rumoured to be an outcome of the hockey wars. He stood barehanded for several years until the chamber envisioned a hockey stick as a replacement. A company was contracted to fabricate a very large goal stick and Florence Greke, Gwen Badgley, Susan Anholt and Cora Greer completed the repair. 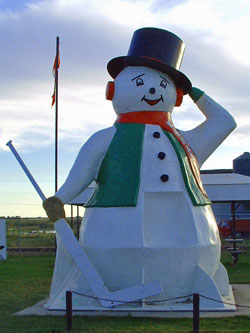