The Canadian Northern Railway reached the remote location called Bonnington in 1889. Railway sources indicate that Bonnington had an abundant water supply and given the fact that the trains were steam engine driven we can assume that the water source here was an important find and utilized immediately. The first water tower was built near the spring just south of Bonnington, Assiniboia, NWT which is what this area was then called. Some early photographs of the community would have been taken from the original tower.In 1910, the new (and existing) 40,000 gallon water tower was built by CNR in proximity to the train station and just across from the first hotel. This tower was constructed with tapered sides; a technology that would vanish within the era because the banding necessary for a tapered building became unavailable.

Water towers were initially railway property and thus were painted and maintained in the tuscan red with cream trim? colours that were prevalent on all CNR property. The records of the Saskatchewan Railway Museum in Saskatoon tell us that the existing tower underwent a refit in 1928.

Put in historical context there were 400 water towers originally constructed in Saskatchewan. As of 2009 there are only five remaining water towers in the province, of which only three are on their original sites. The Kenaston Water Tower is the oldest of the 5 remaining towers and is the only remaining 'tapered' tower, which gives it both historical and architectural significance.

There are few heritage buildings in rural Saskatchewan to acknowledge our past and educate future generations about the history and settlement of the Canadian Plains. Our water tower commemorates our pioneers, the early rail lines that brought them here, their grain trade and its transport by rail, the steam engine era, the railways themselves, and the men who kept the system operating.

The restored water tower in Kenaston is a heritage site and tourist attraction. This structure is an integral and significant site on the Highway 11 Louis Riel Trail tourism corridor. 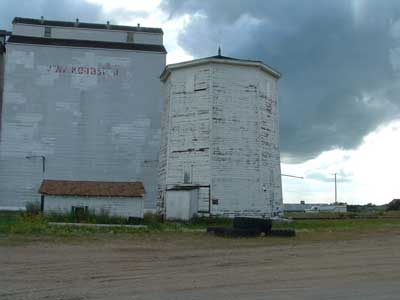 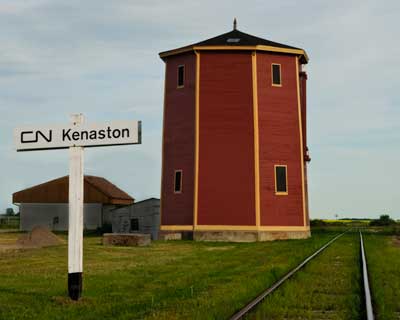 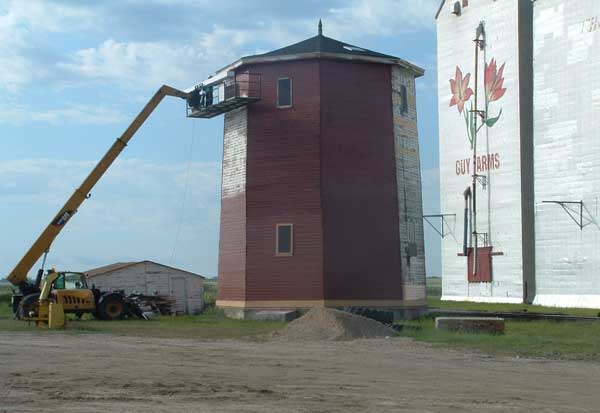 The Kenaston & District Chamber of Commerce water tower restoration was completed during the spring of 2009, thanks to the grant from the Dakota Dunes Community Corporation.

In June, painter/carpenters Al Fiissel and Claude Vaugeois of Bladworth put in a long week replacing some of the weather worn siding on the building and painting. The project completion was only possible because a telehandler forklift owned by Clear Spring Colony was made available thanks to Mike Wertz and the very gifted machine operator David Decker. 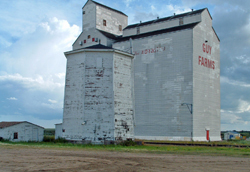 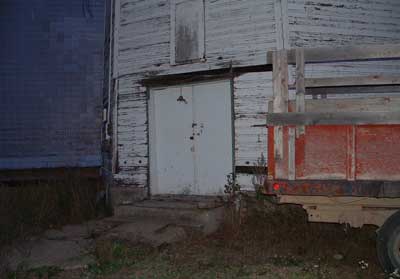 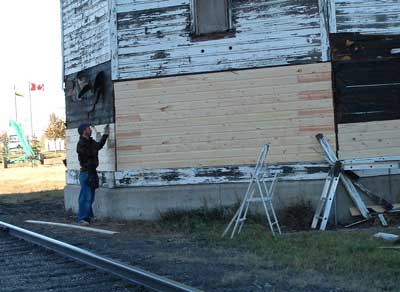 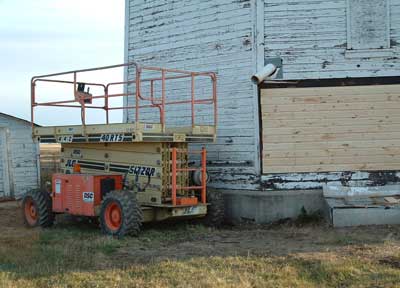 The Village had painted the water tower white in the early 1980's, additionally deterioration had occured over the 100 years of exposure to Saskatchewan weather.  The porch was removed and replacement siding as required was installed by Al Fiissel and Claude Vaugeois. A local scissor list was utilized to expand the work area. 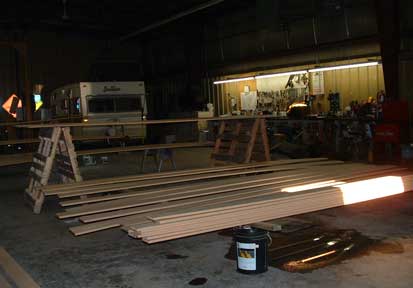 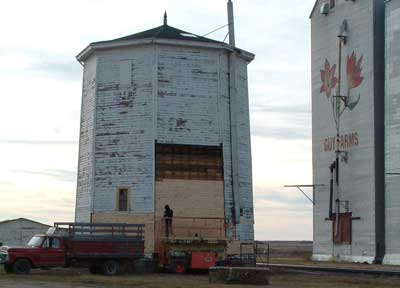 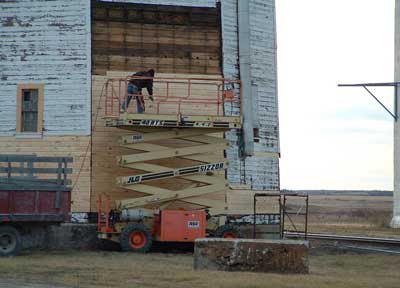 The fascia, corner boards and bottom board were stained in the fall of 2008 utilizing the RM of McCraney shop along with some volunteer labour provided by the RM road crew. The scissor lift was again utilized. 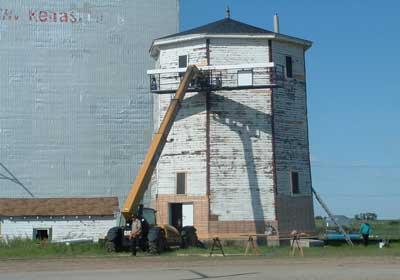 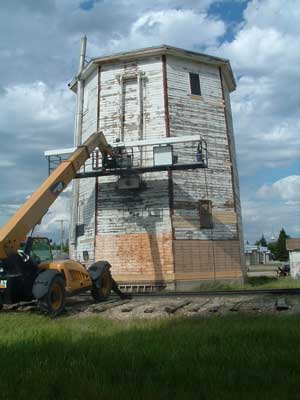 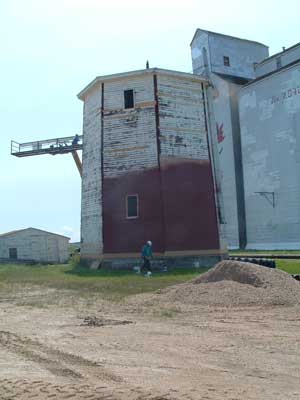 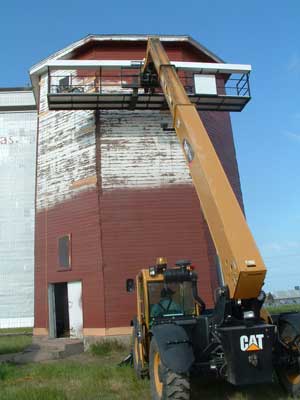 Once the lift was free, Al was able to spray completely around the building. When the painting was complete the crew were able to nail on the various trim boards. 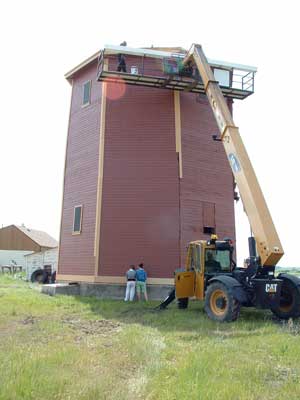 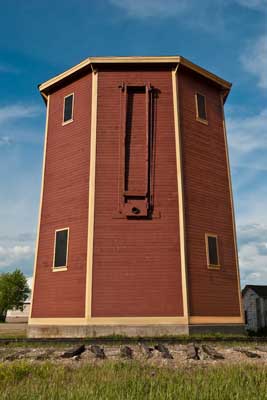 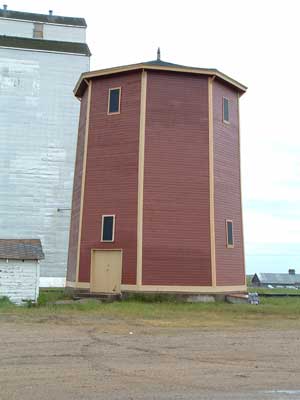 Touch up painting and finishing the fascia board (approximately 38'). The final product! 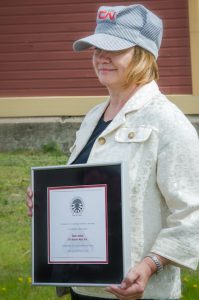 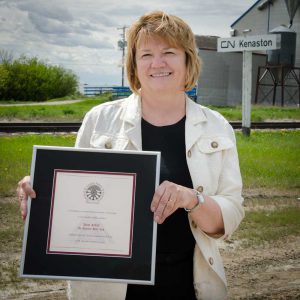 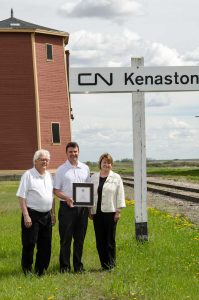